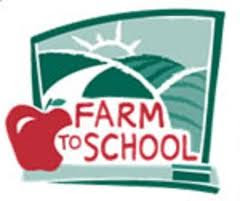 by APRIL FULTON
The U.S. Department of Agriculture just announced a new rule to encourage schools to partner with nearby farms as a way to get more healthy, locally-grown fruits, veggies, and more into school lunches.

Agriculture Under Secretary Kevin Concannon says the rule is "an important milestone that will help ensure that our children have access to fresh produce and other agricultural products."

But access to healthy food doesn't help much if kids won't eat it, warned Alice Waters, the chef-owner of Chez Panisse in Berkeley, CA, and the founder of the Edible Schoolyard program.

The "buy local" rule is just one part of the massive Healthy, Hunger Free Kids Act { Bill PDF } President Obama signed into law last December. That bill is about the biggest thing to happen to school meals since the microwave.

It sets new nutrition standards and bans whole milk. It boosts funding for meal programs by about 6 cents a meal - a hard won provision in a long battle where food stamps lost out. And it's controversial, garnering over 130,000 public comments so far.

Per Wednesday's announcement, the law encourages schools to bring in more "unprocessed locally grown and locally raised agricultural products" by allowing schools to give local providers preference when they bid for school food contracts.

By "unprocessed" the department means it's fine to chill, freeze, peel, slice, cold pasteurize, butcher, or dehydrate the food. But cooking it or adding a bunch of preservatives is not encouraged.